Passion 2013 was a conference aimed at college students. It filled the Georgia dome with over 60,000 students and leaders. Led by leaders such as Louie Giglio and Chris Tomlin, the conference highlighted the atrocity of modern-day slavery and inspired the “Jesus Generation” to unite in a concerted effort to END IT.

I thought I knew what to expect from the conference. Daniel had attended Passion 2012 that had a similar focus. He had told me about it, and I was curious. I decided to go with our church’s group as a “chaperone,” like college students really needed those. Sarah tagged along because the conference organizers opened it up to high school seniors. Daniel also attended. His fiancé, Iva, was there with their church from Oxford. I was ready for a fun four days.

I had no idea that this event would touch me in such a powerful way. First, Here’s a few things totally random, yet entertaining, things I learned at the conference.

So there you go. The random. The fact that most of them are related to food is purely coincidental. Now for the serious things that I learned.

END IT? Yes, END IT. The “End It Movement” was born as a follow-up to the Passion Conferences. It’s how they coordinate raising the funds and distributing them to the partner organizations.

Supporters were asked on a certain day to put a red “x” on their hand to raise awareness. Here’s my attempt. 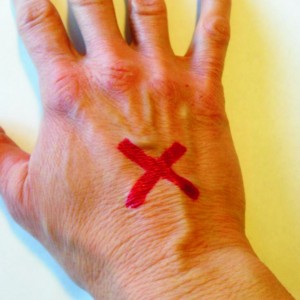 But it was a video that they showed that got to me. That’s what rocked my world. I thought the video interesting from the moment it started, but I have to admit, I was a little tired and was only half watching. But then it had my full attention.

I found the video on YouTube and watched it again tonight. You can watch the video for yourself here.

It was at the 1:39 mark that I froze, standing inside the Georgia Dome, suddenly alone with God in a stadium packed with energetic students. That’s when I realized that the video I was watching was the vision that had been in my head the night I pouted over Speckles. The pictures were the same. The only difference was that there had been no words that night lying in my bed.

Sounds crazy, I know. But it happened. I stood there, unable to move, long after the video ended and the screen went dark. Those around me continued on with the worship service filled with stirring music. I simply stood. Once again speechless before a mighty and powerful God. The words rang in my head, pealing repeatedly:

“What are you going to do about it?”

What was I going to do about it?

I now knew where God was ultimately leading me, but I still had no idea how to get there. It would still take a few months for me to figure out even where I was supposed to begin.

We were given a visual reminder to take with us, cutouts of individuals representing modern-day slaves. I still have mine and stare into her eyes on occasion. She now stands as an additional motivation to continue to seek God’s will in my journey to fight slavery. Her name is Anya. 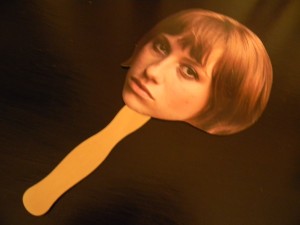